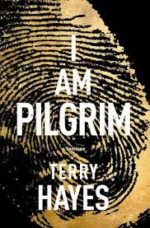 We decided to try an older title this month but quite a challenge as its rather long!

A young woman murdered in a run-down Manhattan hotel.
A father publicly beheaded in the blistering sun of Saudi Arabia. Smouldering human remains on a mountainside in the Hindu Kush. A plot to commit a crime against humanity.
One thread binds them all. One man to take the journey.